Now is as good a time as any to be proudly British.

Also, with more interest in buying local and supporting smaller, homegrown companies closer to where we live, why not add Alstroemeria to that list?

Some of us may remember a time when 90% of the flowers supplied in the UK were British grown. We were all going along swimmingly until a fuel price hike in the UK and Dutch government subsidies turned the tables in the 1970’s.

Up until a few years ago, the percentage of British grown flowers sold in the UK was less than 15%. And 90% of that was going to the supermarkets. But that is starting to change.

Although Dutch flower companies have been one step ahead in the flower industry since the 70’s, government subsidies have recently started being phased out which is having a impact on their production.

With many campaigns encouraging greater enthusiasm for British flowers, the demand for British grown flowers is steadily growing.

If you’re in England and buying Alstroemeria grown in British soil, there’s no doubt you’ll be getting a better quality plant. It makes sense to buy plants that don’t have to travel for weeks to get to your door.

Think about how we humans often feel after travelling a few hours on a plane.

Not a pretty sight...

Although Alstroemeria originate from South America the first new varieties were bred in Spalding, Lincolnshire by plant breeder John Goemans, becoming known as 'the father of alstroemeria’. He was the first in the world to grow Alstroemeria commercially under glass, introducing the first Alstroemeria variety specifically intended for glasshouse growing in 1959.

By the late 60’s breeding really took off with his launch of pink ‘Ballerina’ - the first of about 50 new varieties he developed over the years for the garden and cut-flower industry. This led to Alstroemeria becoming one of the major glasshouse grown cut flower crops in the world today. In 2018 John Goemans’ company 'Parigo' was taken over by Alec White of Primrose Hall Peonies, where the growing and breeding continues.

There are now about 250 different varieties of alstroemeria available in Britain. We grow over 200 varieties on our 8 acre nursery based in rural Bedfordshire, including original British bred Parigo varieties (such as ‘Apollo’, ‘Friendship’ and the ‘Little Miss’ series), the ‘Colorita’ (‘Princess’) series, ‘Inca’ series, ‘Planet’ series and Inticancha collection. Some of our favourites are ‘Rock ‘n Roll’ and ‘Colorita Fabiana’ with their beautiful and unusual variegated leaves.

Alstroemeria are marvelous because of their comparatively long vase-life (up to 2-3 weeks) and have a long, prolific flowering season.

So they are a sustainability win too!

Gives us reason to be even more proudly British.

And that’s why we love ‘em. 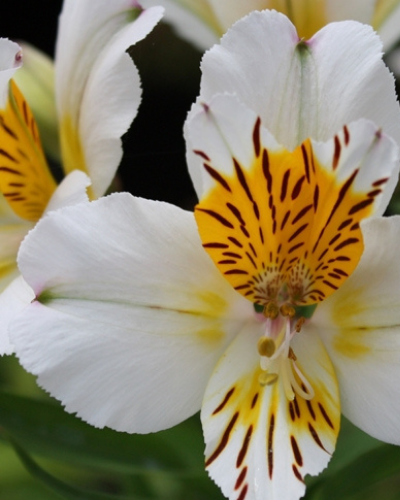 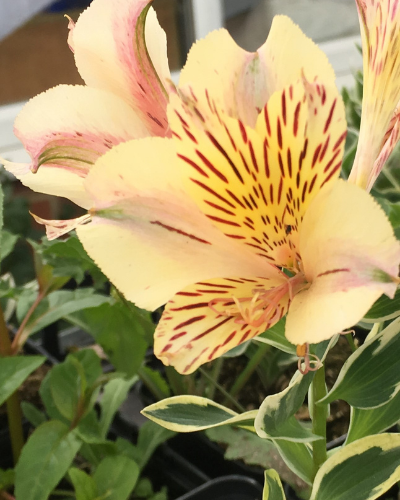 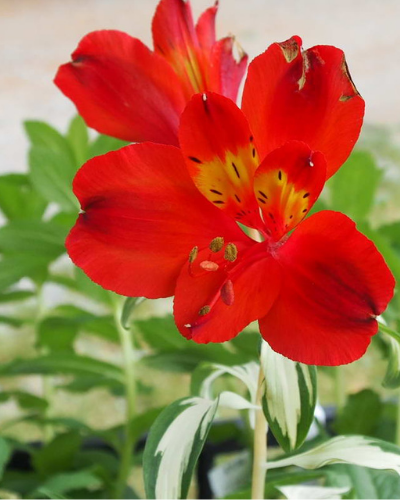